Greenland expedition 2022. In the search of the oldest rocks on Earth 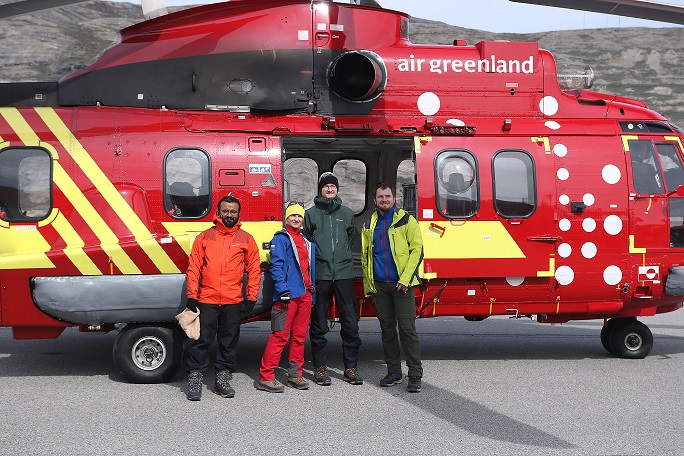 After months of preparations and unexpected last-minute changes in plans, Team PAAN successfully conducted geological fieldwork in southwest Greenland. Fieldwork was carried out by a team of four researchers comprising Prof. Monika A. Kusiak (expedition leader), Piotr Król, Marcin Mieszczak and Tanmay Keluskar. The main objective of this expedition was to conduct geological investigations of the Aasivik terrane, Southwest Greenland and collect samples for geochemical and isotopic analysis.

Southwest Greenland is well known for the presence of some of the oldest rocks on Earth. Though this area has potential for further geological discoveries, a harsh weather conditions and the lack of developed logistics make it a challenging place to work. But adversities are opportunities in disguise, so our team decided to conduct fieldwork in remote areas that have been little studied.

The team began their journey from Kangerlussuaq Airport, Greenland. They flew with an Air Greenland helicopter to a field camp, 80 km to the south near the Sukkertoppen icecap, where they worked for a week. They experienced harsh weather and tiring journeys across the high tundra. Each day they faced multiple challenges, crossing overflowing rivers, climbing steep mountains and walking on snow. During their journey, they encountered wildlife like musk-ox, reindeer and rabbits; both parties were very curious about each other.

The expedition team conducted geological surveying of the area, field observations and sampling of different lithologies. This fieldwork took place under the GRIEG Project framework led by principal investigator Prof. Monika A. Kusiak.

I ACCEPT AND AGREE Using the polestogether.igf.edu.pl website means accepting the terms contained in the privacy policy. In particular, this applies to the acceptance of the processing and storage of personal data collected through this Site and used for marketing and commercial purposes. This website uses cookies collected for statistical purposes, profiling advertisements and used for the proper operation of the website. Terms of storage or access to cookies can be changed in the browser settings - failure to change browser settings is synonymous with consenting to save them.

In the absence of acceptance of the above (and included in the 'Privacy Policy') records, please do not use this Site and leave it immediately.